Prague is the largest city in the Czech Republic and, as the country’s capital, is home to most Czech state institutions.

Prague covers an area of 496 square kilometres and has around 1.3 million inhabitants.

The city developed into its current state over many centuries, and as the historical capital of Bohemia it was the seat of Czech princes, kings and Emperors of the Holy Roman Empire.

Recognized as one of the most beautiful cities in Europe, Prague is one of the continent’s most-visited cities attracting several millions of visitors from around the world each year.

Prague’s historic centre became a UNESCO World Heritage Site in 1992. The centre is comprised of several historic districts: Staré Město (The Old Town), Josefov, Nové Město (The New Town), Vyšehrad, Malá Strana (The Lesser Side), and Hradčany (the Castle District) together with the Prague Castle, which together form the largest castle complex in the world.

The Convent of Saint Agnes of Bohemia (Klášter sv. Anežky české) and Břevnov monastery are among the oldest standing buildings in the city. The Old New Synagogue, one of the oldest synagogues in Europe, with its graveyard is the most significant monument of the former Prague Jewish ghetto.

Many of Prague’s major monuments lie on the route of the so-called King’s Way which leads from the Municipal House (Obecní dům) to the Prague Castle via the Old Town Square (Staroměstské náměstí), with the Old Town Hall and its famous Astrological Clock dating from the 14th Century.

The route continues over the Charles Bridge to the left bank of the River Vltava and the Lesser Town Square (Malostranské náměstí), where stands the magnificent baroque Church of St. Nicholas (chrám sv. Mikuláše). The route ends at the Prague Castle wherein lies St. Vitas’ Cathedral, where the Czech crown jewels are kept. 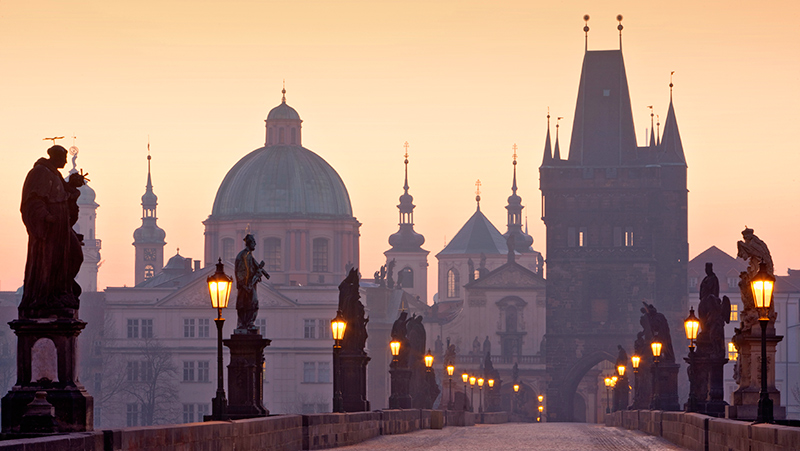