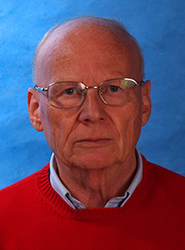 Professor Reinhard Graf will be presenting this year’s Erwin Morscher Honorary Lecture at the 19th EFORT Annual Congress Barcelona 2018 which will summarise his deep experience in hip sonography within the specialty of paediatric orthopaedics.

Professor Graf is now retired from medical practice, but his agenda is fully booked a year ahead. He went back to science to share his orthopaedic knowledge with the younger generation and pass on the skills and experience he acquired during his many years as medical director of the Landeskrankenhaus Stolzalpe. This medical center, which grew with his revolutionary developments of ultrasound examination of the hip in babies, was the platform for an outstanding worldwide accomplishment. Indeed, he is the main author of more than 250 scientific articles in international journals and personally has conducted about 500 training courses on hip sonography throughout Europe and in Australia, Japan, Israel, Palestine, the United States, Canada, Russia, China, Mongolia, South Africa, Jordan, Saudi Arabia, Emirates, Iran, Turkey, Iran, Chile, Iraq and other countries. He has 30 honorary memberships worldwide and countless medals, and has taken part in the writing of about 20 books in different languages.

On top of all his scientific awards and honours, Prof. Graf received the Great Honorary Medal for Specific Merits of the Austrian Republic in 2008 and was named honorary citizen of the city Stolzalpe. These recognitions are justified by his huge contribution to the paediatric specialty by the development of his innovative DDH technique in the late 1970s while he was transitioning from a general practitioner to an orthopaedic surgeon. He received his MD degree from the University of Graz in 1971 and, as soon as he started practicing the orthopaedic specialty in the early 1980s, he published his first experiences with the use of ultrasonography in infants’ hips for the early diagnosis of DDH at a time when plain radiography was the gold standard for diagnosing this condition. Ultrasonography can detect several hip problems that clinical and/or radiographic examinations neglect.

In the recent years, the use of sonography for the diagnosis of developmental dysplasia of the hip (DDH) in infants gained importance. Today, Graf’s technique is used worldwide to correctly diagnose infant hip dysplasia as sonograms allow the medical interpretation to be reproducible, reliable and independent of the examiner’s experience. The technique is now standardized, and many European countries have set general screening programs for all babies.

During the initial examination, several angles of the hip anatomy are measured and stability of the hip is assessed. Instability of the hip can be common in newborns as the ligaments get tighter with age, but in a normal-functioning hip, the femoral head rests comfortably in its socket. Further examination with ultrasounds allows the orthopaedist to confirm if DDH is present: The femoral head freely moves within the socket (back and forth) or it might even move out of the socket. The ultrasound machine sends soundwaves through the hip area showing both the bony and cartilaginous parts of the newborn’s hip joint. The Graf method for ultrasound classification of DDH combines both alpha and beta angles, as well as some additional subdivision measurements. Therefore, the main objective of this technique is to recognize possible dysplasia as early as possible and prevent high exposure of the child to radiation.

Take the opportunity to learn about the most widely used DDH screening technique from the developer himself during his plenary session scheduled for our upcoming congress in Barcelona. Attendance at this honorary lecture is included in the full-congress registration. 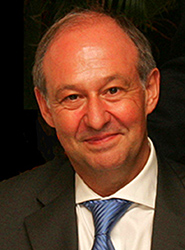 Professor Hernigou will be presenting this year’s Michael Freeman Honorary Lecture at the 19th EFORT Annual Congress Barcelona 2018. Professor Hernigous’s presentation, entitled “Cell Therapy In Orthopedic Surgery: 30 Years Of Experience”, will reflect his 30-year deep experience by compiling in a few minutes the multitude of results he has achieved within the cell-therapy research field.

Between 1985 and 1990, Prof. Hernigou initiated a novel medical and academic path dedicated to the use of autologous bone-marrow grafts to treat osteoneocrosis and several orthopedic pathologies. Indeed, after his first trials to overcome nonunion fractures, he proved the technique was effective and safe in different orthopaedic backgrounds. In 1992, the term of “regenerative medicine” was introduced to describe medical principles based on stem cell technology and tissue engineering. All of a sudden, replacing human tissues and restoring their functions appeared as possible. In the following decades, the research on stem cells emerged as one of the most promising advances of modern medicine giving to Prof. Hernigou even more reasons to develop his studies around bone marrow grafting despite the regulations against human application.

In 2013, Prof. Philippe Hernigou and his colleagues published which can be considered as the most important scientific study within the orthopaedic cell therapy field. In this work, entitled “Cancer risk is not increased in patients treated for orthopaedic diseases with autologous bone marrow cell concentrate”, the research team followed-up tumor development at the site of treatment in 1873 patients treated with bone marrow concentrate (BMC) and compared the cancer incidence of this group to the frequency and distribution of the French population. The magnitude of the cohort and the length of this large-scale study (at least 5 years of follow-up, an average of 12.5 years) are without any doubt unequaled parameters. Two fundamental conclusions can be drawn from their findings: there is no evidence of tumor formation at the site of BMC treatment, and; patients receiving autologous BMC therapy do not have a higher cancer incidence. Professor Hernigou proved therefore the safety of autologous cell-based therapy and heralded a change for acceptance by medical regulatory authorities.

Professor Hernigou consults his patients one day a week and continues to be active in the operating room by practicing hip and knee surgeries, as well as by treating osteonecrosis cases. He keeps substantially participating to current research in many fields of orthopaedics as proven by his more than 280 publication referenced in PubMed. He is professionally involved everywhere, as Member of the International Hip Society, as treasurer of the International Society of Orthopaedic Surgery and Traumatology (SICOT), as member of the French Academy of Surgery, as President of the French Japanese Orthopaedic association and Vice-president of the Association Research Circulation Osseous (ARCO). He also greatly contributed to the development of his own National Society as the 2016 President of the SOFCOT (Société Française de Chirurgie Orthopédique et Traumatologique). He has countless distinctions and awards in his expertise fields as he personally keeps taking part of all the big educational orthopaedic meetings worldwide. All his recognitions are justified by his huge contribution to the stem cells research within the team Inserm n°10 from the Institut Mondor de Recherche Biomédicale (IMRB), by his medical commitment towards his patients at the Henri Mondor Hospital, as well as for his educational vocation reflected in his constant sharing with the young orthopaedic generation.

Take the opportunity to attend one of the most complete and up-to-date overviews of the orthopaedic cell therapy advances of the last 30 years. Attendance to this Honorary Lecture is included in the full-congress registration.